So I shared my vacation observations in my last post and thought it only fair that I share actual vacation highlights… though really, the whole vacation was a highlight.

We kicked off the trip with two days on the road to get us to Houston where my brother and his family live. My brother has lived in Texas since I was two (he’s 19 years older than me, yes, I was a “surprise”) and almost every spring break from when I was 3 to 22, my parents and I drove down to Texas to visit him, first in Austin where he was in college and then Houston where he has lived his entire adult life. I have taken this trip so many times, but this was the first time I drove without my parents (I’ve flown by myself and with Simon/kids ever since college) and that part was a little strange. But it was a smooth sailing trip aside from almost running out of gas (15 miles to E and only a Dollar General to be found) and driving into a tornado in Little Rock.

We spent our first weekend in Houston eating various meals that all included tortillas and drinking many margaritas and beers. We also took the kids to a parade and a park. My nephew and his girlfriend babysat one night while the grown ups went out for the evening. My nephew, a very modest type, reported that the kids did fine and he changed Jack’s diaper with his eyes closed. Something he can add to his resume when he’s applying for college next year. 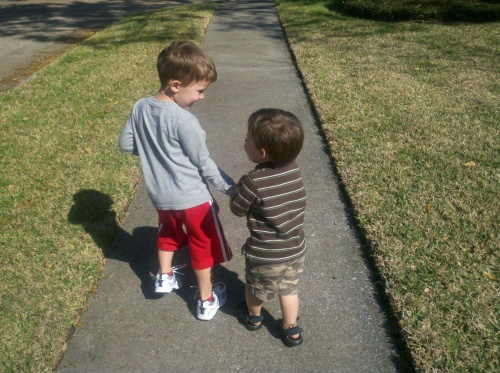 That Monday we headed off for Corpus Christi to see my parents, who have been Winter Texans on Padre Island for 5+ years now. Per my father’s request, we stopped on our way to pick up a pound and a half of beef jerky – delicious. We had no plans for our trip other than to eat good food (check), go to San Antonio for the day sans kids and eat a mammoth cinnamon roll (check) and get tan (check). We also did some shopping and visited the aquarium, something I’m quite certain the adults enjoyed more than the children [during the dolphin show Jack headbutted me in the face in an attempt to be anywhere but there].

We left the grandparents, who I’m sure were glad to recapture the peace and quiet not allowed by two tireless grandchildren, and headed back to Houston to shore up for our return drive to Michigan. Sunday we ate at Good’s Taqueria (delcious) and visited the Rodeo. We did not see any roping of steers but we did pet animals (including a llama, but of course) and see the biggest cow I have ever seen, a longhorn steer. Monday morning we packed up and headed north, once again leaving peace and quiet in our wake. 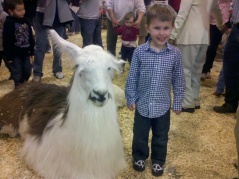 [above: baby got on a llama, Liam and the llama; below: 30 minutes waiting for this much happiness = totally worth it, the longhorn, for reference, it’s horn-span was about 6 feet – the thing was HUGE] 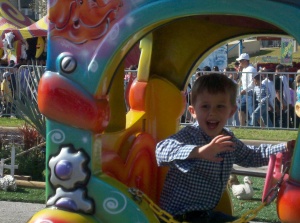 Going to Texas is still one of my most favorite things to do and we hit the trifecta of perfect warm but non-humid weather, great meals/drinks and the ideal companionship of family. Hopefully future trips will live up to this one.

This entry was posted in Life in general and tagged minivan, road trip, texas. Bookmark the permalink.