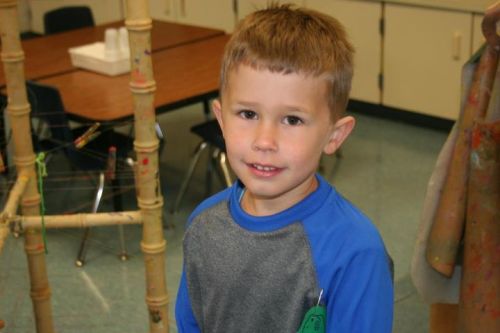 That, right there, is the face of a kindergartener. And I’m more than okay with that… we dropped him off and I didn’t cry or even get choked up – it just seemed natural. Liam’s been in daycare since he was 3 months old so leaving him for the entire day is nothing new, though kindergarten seems like a much bigger deal, like the major league compared to minor league.* Though when I drove away, unlike with daycare, I was thinking how I couldn’t wait to pick him up and see how his day went. [Spoiler: It went great!] That sounds like I don’t care what goes on at daycare, which isn’t quite right, it’s more that I pretty much know what goes on at daycare but kindergarten is the unknown. It’s the tip of the iceberg of unknown. From here we have years of school and adventures he will have separate from us. And I think that’s why this moment seems so big and so normal all at the same time because this is the new reality, the new every day. And it’s true, before we know it, he’s going to be all grown up. In the meantime, I can’t wait to hear about those adventures.

Oh, how this picture makes me laugh! This was the best of the bunch and what we get when we  ask our kids to smile.

And not to leave Jack out, his daycare report detailed that he “Tried Didn’t Go” twice on the potty, an improvement from last week when he “Refused” three times to even sit down. And he showed off his new shoes and pretended to be a butterfly on their daily walk. I love daycare reports. (Keri – It’s like low-tech Facebook updates about my kid.)

And here’s a cute story from yesterday: I was wearing a t-shirt with a heart patch on it and Liam said in a very wistful voice, “That heart on your sweatshirt makes me feel like falling in love.” Later that evening he threw the Wii remote at my head.**

*Did you see that, I used a sports analogy!? Fancy pants.
**Liam will not be playing the Wii for the next couple days.