Sometimes you need to go off the books and do something out of the norm, push the reset button on life. Yesterday was one of those times.

When I met Simon at his work yesterday to do the kid trade-off both boys were in fine form. Even though I remembered to park on Jack’s side (I’d parked on Liam’s side the last time we met there and let me tell you do they keep track of who was last), he was still crying because I didn’t hug him before I got in the car but I did hug Liam, who was crying because I didn’t hug him properly (apparently). The level and intensity of their whinging was above normal. And while I was trying to zen out and maintain a calm voice, I had an inspired moment and decided that we’d go to Millenium Park for the afternoon. I needed to get back on the workout bandwagon and the boys needed to blow off some steam.

Now, my moment of clarity didn’t mean the boys were all on board with my idea but after a little convincing and coddling, they came around to see my way and were excited to go someplace newish to them (we’ve been there before but not in over a year).

I promised them that after we walked the trail around the lakes, we’d go to the playground. 45 minutes later, after a pit-stop for fruit snacks and their new favorite Mio-enhanced water (oh my goodness, they ask for Mio all the time, apparently that marketing campaign is stellar), we were all refreshed.

The weather was gorgeous and the views were so much nicer than our normal neighborhood walks. We apparently needed that change of scenery. Everyone was happy once again.

When I was tucking the boys in for the night, Liam said to me, “I had a great day today, thank you.” I’m pretty sure he wouldn’t have said that if we’d done our normal routine because at 2:30 we were on the road to him losing the Wii and me losing my patience but we averted that disaster and instead had a great afternoon. Mission accomplished. Reset achieved. 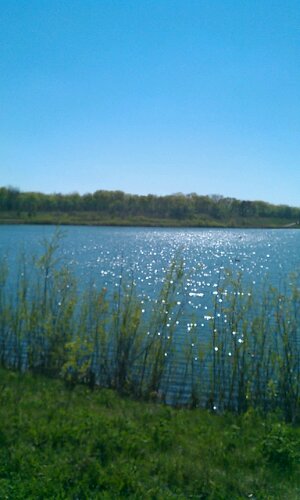