One of my favorite bloggers (Linda from All & Sundry), from the very beginning of when I started reading blogs has a long-standing tradition of answering the following questions as a way of reviewing the previous year (though this year she took a break) and this year I thought I’d do the same (answer the questions, that is, not take a break). I love the questions and the answers they provoke.

1. What did you do in 2012 that you’d never done before?
– Traveled with two children halfway around the world
– Single-parented my kids for three weeks while Simon was in Australia
– Got an hour-long massage (it was notable because it was on my list of things to do before I turn 35)
– Raw food detox for 5 days

2. Did you keep your new year’s resolutions, and will you make more for next year?
Please refer to the list, I will soon do a full recap of resolutions – just as soon as I figure out new ones for 2013. I kept most of the ones that really mattered. Though I can’t say I made a conscious effort to do one random act of kindness a week, but I think in general I’m a thoughtful person so we’re going to call that a win. But I definitely didn’t sell $500 worth of stuff on Craigslist and while realistically, I use a calm voice more often than a yell-y one with my kids, I still yelled way more than I would have liked. But the rest were golden, even cutting the hubs some slack – right, honey? [Edited to say, I looked at my 2011 resolutions when answering this – total fail. Whoops. But I did great at keeping 2011’s resolutions, not so much with keeping 2012’s. Ha.]

3. Did anyone close to you give birth?
My niece had her second baby, Ethan, and he’s just the best to cuddle at family gatherings (plus, he’s my godson!). And the babies keep coming with my friends… many close friends had new babies added to their family this year and that is great since it helps me get my newborn baby fill without actually having to deal with middle-of-the-night feedings.

4. Did anyone close to you die?
My sweet mother-in-law, Dorothy, passed away after a long battle with illness. That was more than enough for this year.

5. What countries did you visit?
Australia.

6. What would you like to have in 2013 that you lacked in 2012?
More patience (which is NOT me asking God for my chances to practice patience, I have plenty on a daily basis with my boys, thankyouverymuch). More laughter with family and friends. A husband who works first shift, specifically an Australian husband named Simon who works first shift (not just any husband will do) – February will mark three years that we’ve been doing this split-parenting thing and I am just so weary of it. And a new (to us) house. The start of the story I have had in my head for over a decade down on paper (or computer, as the case may be).

8. What was your biggest achievement of the year?
Not to belabor the point, but I think making the best of having Simon in Australia for three weeks was a huge achievement. I have no regrets about his going, despite the cost and stress of dealing with everything else, and I am happy to say that the time went quickly and the boys had fun thanks to a jam-packed schedule of spending time with friends and family. It’s hard though because those same three weeks would not at all be considered an achievement by my husband, necessary but not an achievement.

9. What was your biggest failure?
I feel like all failures are parenting related, where I feel I didn’t live up to the kind of parent I should be for my boys. But I also think that is the bulk of parenting because it is such a huge thing in life, we are constantly somewhere on the continuum of trying to improve and do things differently (if not better).

10. Did you suffer illness or injury?
I finally sought out help for the neck pain I’ve been experiencing for ages as it was at the point where it was impacting my daily life. After a month of PT and the acquisition of my own personal traction machine, I’m happy to say that I no longer have daily pain and headaches, though I still can’t sleep on my back without waking up with a headache. Hello, my name is Michelle and I hurt myself sleeping.

11. What was the best thing you bought?
A plane ticket for Simon to go to Australia. Any tickets for live music.

12. Where did most of your money go?
Outside of mortgage, car payments, food and childcare? Plane tickets and caffeinated beverages.

13. What did you get really excited about?
Seeing fun. in concert. Simon coming home from Oz. Girl’s Weekend Away with my college friends. New babies arriving in the world. Liam starting first grade. Jack being potty trained.

15. Compared to this time last year, are you:
– happier or sadder? happier
– thinner or fatter? fatter – but that will change soon [more on that coming up]
– richer or poorer? same

16. What do you wish you’d done more of?
Working out. Reading books. Writing. Praying. Concert-going.

17. What do you wish you’d done less of?
Driving around town (picking up kids, dropping off kids, getting errands done).

18. How did you spend Christmas?
Same as every year of my life (but one) – at my parents’ house for Christmas Eve and at my brother’s house for Christmas Day and out for breakfast with the whole fam the day after Christmas. When these traditions change, I think I’m going to have a hard time reconciling it.

20. What were your favorite books of the year?
– Crazy Love – Francis Chan (still reading it for small group)
– Imperfect: An Improbable Life – Jim Abbott
– You Take It From Here – Pamela Ribon

21. What was your favorite music from this year?
– The Civil Wars were my favorite band and the rest are listed here.

22. What were your favorite films of the year?
Is it totally cheating to list almost all the movies I saw in the theater? When you’re paying a sitter, you gotta make your movie choices count…
– Argo [my favorite of the year]
– Rise of the Guardians
– The Avengers
– The Dark Knight Rises
– The Hunger Games
– This Is 40
– Crazy, Stupid, Love [technically this did not come out in 2012, but I watched it on the plane to/from Oz]

Least favorites: Melancholia, which I technically watched on the plane on the way to Australia but it SUCKED. Do not ever watch it.

23. What did you do on your birthday, and how old were you?
Church in the morning and then spent the rest of the day hanging out with the boys until we went out for dinner to one of my favorite restaurants (Rose’s) with some of my favorite people. I turned 34. Simon’s mom died two days later so it was a calm, happy moment in the midst of a very sad time for our family.

24. What one thing would have made your year immeasurably more satisfying?
Buying a new house. [Oh, and spontaneously achieved independent wealth.]

25. How would you describe your personal fashion concept in 2012?
Comfort and function over everything else. And cardigans and scarves were my ever-present staples.

27. Tell us a valuable life lesson you learned in 2012.
Things are seldom as perfect as they appear to be from the outside looking in. Comparison will steal your joy each and every time. God is faithful to those who ask for help and put their faith in Him and He can (and does) work miracles big and small. 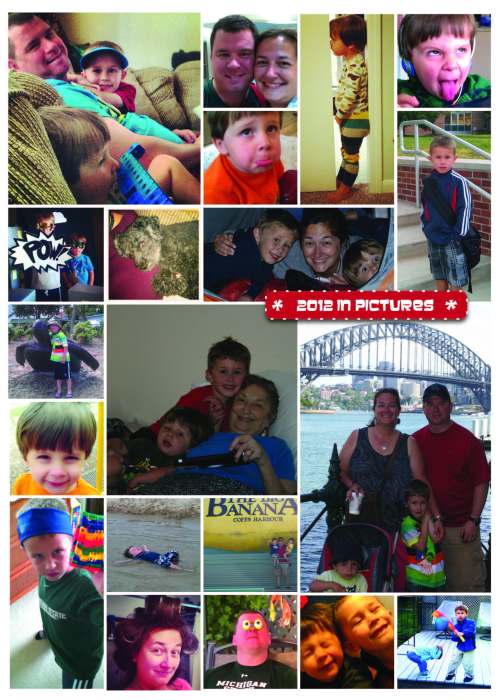 This entry was posted in Life in general, Resolutions. Bookmark the permalink.