Happy Tuesday, folks – hope the week is treating you well now that we have survived the Polar Vortex and the Arctic Blast – I’m just waiting for the Blizzard Apocalypse to strike. For family and friends out of the country, the weather reports have been a great source of entertainment lately – we are all amused by the drama cold weather brings. It’s like it’s surprising that winter has come yet again, like it does EVERY year.

The following is a series of things that have been on my mind and I just want to gather them all in one place. They are all related to Jack and his little hand (more on that here). I hope that someday he can read this and realize that while his little hand is a “thing” it’s not the only thing about him, it’s just another part of who he is and what helps make him the amazing person he is – but it’s also something I’ve put a lot of thought into to figure out how to shape his view and thinking with regard to it and how he lives his life.

Jack has started a new habit when he is asking for something and I have already turned him down once, he puts his hands together like he is saying a prayer and pleads, “Pretty please.” The first time he did this, I had to stop myself from automatically saying “yes” because this little gesture was punctuated by the difference in his hands. That little hand stops me in my tracks sometimes and I have to remind myself that he gets no favors because of it and I do him no favors if I baby him or allow for different rules because of it. It’s not tough love, it’s just love. And the hope he won’t use the hand has an excuse for not doing something or has a means to garner sympathy.

I’ve also discovered that he’s caught on that he can use his little hand as a reason others aren’t nice to him – he made up a story that some boys at daycare told him his little hand was stupid which instantly made my big, bad momma bear come out but after further questioning and checking with his teacher, I discovered he likely made it up because it seems he has a flair for the dramatic and likes playing the victim. I’m onto his tactics and have related the story of the boy who cries wolf, while reminding him that if someone does make fun of him for his hand, a) it’s not okay, b) what they say is untrue and c) they aren’t worth being friends with – but he should still be nice to them.

A friend had a baby recently and the first time we visited her, Jack checked her hands to see if she had two big ones or one little one like him. This would have given me pause if it wasn’t for the fact we had just seen a bunch of children younger than Jack at a Lucky Fin Project gathering who all had limb differences like him. My friend admitted that his checking made her heart hurt, but it made me smile because for once he didn’t just assume he was the only “different” one in the room. That’s why the Lucky Fin Project is awesome – it raises awareness about limb differences and celebrates them – bringing us together online and in person.

A couple weeks ago, as we were pulling out of the driveway, Jack asked, “When I go to heaven, will I have two big hands?” THAT, that made my heart hurt. I responded with, “I don’t know buddy, but I bet you’ll have whatever hands you want in heaven.” I pray that someday he’ll be content with the hands he’s got and not be wishing for something different. But I pray the same thing for Liam and all the people I love, that they will be content with who God made them to be and not go after being something they are not.

This math question was in Liam’s homework packet last week: 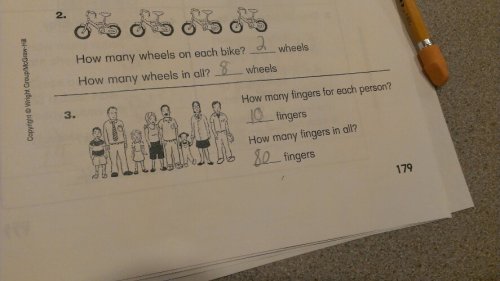 Can you imagine why I might have a problem with it considering one of my children only has six fingers? The lovely assumption that 10 fingers for each person is a given. The possibility that this question will be included in Jack’s homework packet when he is in second grade?

This article ran in the Sunday paper and was given to me by our very well-intentioned daycare teacher who perhaps realized I might be offended but was nice enough to think of us when she read it. I have no qualms about the story, but I wish the reporter had taken a little time to talk about all the things the little girl can do with her limb difference (which, incidentally, is a whole category of “conditions” but not a specific condition itself… it appears the girl has symbrachydachtyly like Jack, NOT a condition called “Limb Differences” as reported in the article). The article also reported that the girl was born without a hand which is just untrue, she appears to have been born without a fully developed right hand; in the pictures she does have a hand that is missing digits. The Robohands, while very cool (and the whole high schoolers building it aspect is also pretty amazing), does not seem necessary in this case and I feel like the articles makes it sound that way – like the Robohand is helping her overcome this horrible thing when in actuality, it is NOT a horrible thing or a deficit. I hope the little girl in the article and her mother realize that her limitations are not about questions of “can she or can’t she do something” but instead are opportunities to figure out how to do something differently. I don’t expect Jack to tie his shoes the same way that Liam does, but I expect that we’ll figure out a way for him to do it. And he can squeeze the toothpaste out just fine. Thankyouverymuch.

As I’ve talked about before, the thing we tell Jack to tell others when they ask about his hand is: “This is just how God made me.” That his little hand is what makes him special… which of course, in brotherly competition, leads Liam to ask, “What makes me special?” And rather than highlight all the things about him that make him who he is, we stick with the story of his belly button which then leads to picking one thing about all the people we know and talking about what their special thing is, because we are all unique, physically, mentally, spiritually and socially (for the record, my special things are my longer-than-my-big toes second, third and fourth toes and Simon’s is that his uvula is split in two [the hangy-downy thingie in the back of your throat]). No other person is exactly like us, though we may share common qualities, God made us all special. Not better or worse than any another person but special. Individual. Each with our own set of characteristics. Our own set of problems and our own set of joys. The one thing we universally have in common is that we are all different.

This entry was posted in Life in general, Random, Symbrachydactyly. Bookmark the permalink.

5 responses to “Scenes from a life lived (limb) differently”