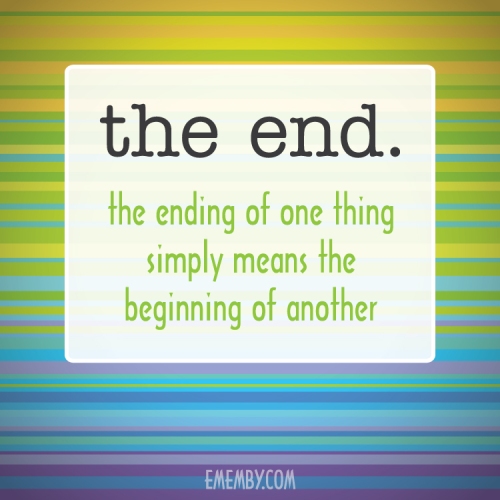 Today’s photo prompt from fatmumslim’s photo a day challenge is “the end.” Seems appropriate for the day before my birthday. The end of one year, the beginning of another. So long, 35. Hello, 36. I have no problem with my age, except for “officially” having to round up to 40 – no thank you.

Back in the days of the paper planner (yes, I know some people still use them but I, myself, do not), I had one that listed next to that days’ date, the number of days that had passed in a year and then the number remaining for the year. On my birthday (on a non-Leap year), the numbers for both before and after were the same – hence I discovered that July 1 is the exact middle day of the year (at least three out of four years). There is a part of me that LOVES that symmetry. 182 days that have passed, filled with fun, adventure, mundane tasks, regrets, joys, defeats and all the stuff life is made out of and then 182 more days of possibility to come before the “end” of another year.

The end isn’t really the end, it’s just the beginning. It’s arbitrary. The calendar itself is a convention of man… a way of keeping track of the world. Each year, while cyclical in seasons, sunrises and sunsets, is a passage of time that doesn’t really matter other than a way of keeping track. What matters is what we do with that time. Do we spend it doing the things we love? Simply surviving or thriving? Making the moments special, making them matter, making a difference? Or are we coasting, waiting for something to happen to us? Life is a mix of all that… sometimes we need to sit back and drift a little, to regroup. And sometimes we need to be pushed into the fray or to pick up a cause and carry it boldly forward. Life is, after all, about LIVING. Doing. Being. Loving. Laughing. Crying. Beginning, again and again.

There is great hope in that. New beginnings, even as something feels like it is ending. As a Christian, even death doesn’t hold the same power because it is merely the beginning of heaven… or a continuation of eternity if you believe that eternity starts when you accept Christ’s role in your life.

I’m ready for a new beginning. I’m ready for 36 – I can’t wait to see what is coming. Happy birthday to me (you know, tomorrow).