This is our angry hornet baby, also known as Jack.

It is not surprising to me that he has a temper, neither Simon or I are what you would call mild-mannered. Simon’s temper is more quick bursts whereas mine stews and then boils over. Liam is like Simon, he will have sudden fits of anger where his face suddenly flashes with rage but in the next moment he’s all sweet and sorry for his actions. He simply needs to think before he acts. Jack is potentially more like me, though I think his stewing has taken about 2 years to come to a boil and suddenly we have quite the aggressive child. Oh my.

In the last few days he’s been THAT KID wherever we have gone, but especially around children who are younger/smaller than him. Like he’s trying to make up for all he’s endured from his older brother since he was born. On Sunday he attempted to drown our friend’s 18/20-month-old quite a few times (pretty much every time he was let loose again in the front yard after getting in trouble for the last incident). He was very nonchalant about it, ever so slightly pressing on his friend’s back, inching their face closer to the water. Monday he kept pushing another toddler and stealing her pacifier. And Tuesday evening he hit a double whammy of sisters who he deemed himself superior to and then proceeded to slap, push and steal his way into timeouts, removal of toys and a spanking. No punishment or diversion of attention will deter him from his mission to antagonize and bully the other children. He left the girls alone long enough to dump two sippy cups in the toilet (thanks for that, kid).

And while I know this is normal, expected behavior, especially from a second *boy* child who has an older brother who antagonizes him, it’s horrifying as a parent. No one wants their kid to be THAT KID – whether it’s the one screaming in the grocery store, throwing food at the restaurant or hitting other children on playdates – but at some point we all have THAT KID. And I need to remember that my kid isn’t the only kid who hits other children. It’s also a great reminder to show more grace to other mothers when we see them dealing with a tough situation out in public (or in their own homes), to remember not to judge them. We’ve all been there or will be there… we’re in it together.

My sincere apologies to my friends whose children have been on the receiving end of Jack’s temper, I promise he won’t always try to drown, hit and steal from your children. Learning better behavior takes time and perseverance (goodness how I wish there were some aspect of parenting that was instant and was best done through avoidance). 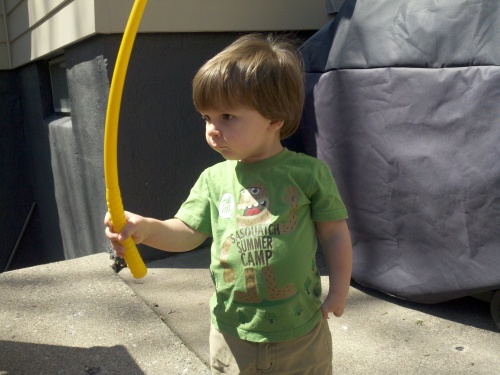 Even this adorable mop of hair, though gained through
avoidance of a haircut, took time to grow out.