I Love Messing with My Husband 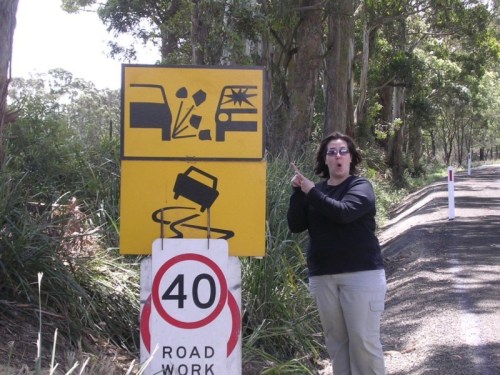 My husband is a cornball; just like my dad, he tells corny jokes. Or else jokes that only teenage boys and his significant-other-at-work* would appreciate. After repeating one of these stupid or pointless jokes to me, I often look at him and shake my head and say, “Honey, please remember I’m not a teenage boy, or Nick.” Despite his childish sense of humor, he shows a remarkable lack of tolerance when he is the butt of my jokes, mostly because when I find something that bugs him, I drill it in there to make up for all the times I’ve had to listen to his jokes (daily). I quite enjoy jumping on his nerves, this is not something I’m working on.

The photo above is from our most recent trip to Australia when Liam was 3 months old. While we were there we did a lot of driving as we flew into Sydney, stayed with friends who were and hour out of town, visited friends another hour into town, then went to his parent’s house 6 hours north on the coast and then back down to Sydney suburbs and further south another couple of hours to visit the best man in our wedding and of course back to Sydney (the previous sentence = oodles of driving). Since we were in the car a lot and I wasn’t driving (opposite side of the road and all), I took it upon myself to notice my surroundings, which included a fair number of road signs. Signs that warned that “microsleeps can kill**” and alerted us of kangaroo, koala or wombat crossings. But my favorite was the one from above indicating loose gravel because the gravel is HUGE and this caused me to shout, “Watch out, the other cars could kick up boulders onto our windshield!” This really bothered Simon, so of course I couldn’t stop saying it and finally he pulled over and made me take a photo with one. Don’t I look properly cautious and alarmed? [Note: Also, doesn’t the bottom sign pretty much look like the car is for sure going to tip over?]

The other signs we often saw were for the National Roads and Motorists’ Association (NRMA). When Australians say this abbreviation, they spell it out, saying each individual letter. I preferred to say it as an actual acronym and pronounce it like a word (nerma), which I said in a voice much like Elmo when he says his own name. Then I started just saying it at random times, like when we were falling asleep or sitting in traffic or waiting for our flat whites (delicious espresso with steamed milk) at a coffee stand. Don’t you know Simon loved that, too. Nerma.

I tease because I love.

But I believe that more than anything, Simon will hate my sharing the photo below with you. I took this almost a year ago and have been saving it for a special occassion. Simon came home from work one night, took off his shoes and then had to run back outside for something so he slipped on his sandals over his socks. And while I am not a fashion snob or anything close, this is one combination I cannot get on board with, so I waited inside with my camera and took a picture when he came back in. I swore I deleted it (sorry honey, I lied) and I believe he’s forgotten about it, until now…

Sorry, my love, but I had to share this photo as a payback for leading me to believe you forgot the U2 tickets at home when we were almost to Lansing on Saturday. You deserve it. And I love you.

*Simon and Nick have worked together at both Simon’s current job and at his former job and the LOVE the same things, Primere League Soccer, AC/DC (and all 80s and 90s bands) and potty humor. Nick’s wife, Amy, and I refer to the other as their boyfriend because they are two ridiculous peas in a pod.

** This sign caused me to exclaim, “Those pesky microsleeps, you just can’t trust them!” [Yes, I know, falling asleep at the wheel is v. bad, but don’t you kind of love the term “microsleep”?]

This post is linked up with Jill at Diaper Diaries.

This entry was posted in who is ememby. Bookmark the permalink.

5 responses to “I Love Messing with My Husband”