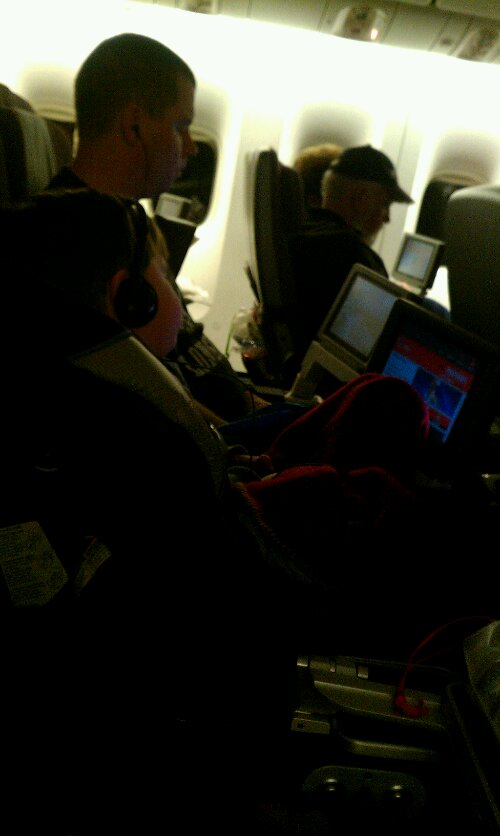 So far things are good on our way to Oz… Liam fell asleep during takeoff and Jack soon after.
Qantas is totally the way to go and I don’t just say that because they upgraded us to premium economy seats (which are nearly worth the actual upgrade cost were we to ever afford them). I’m currently enjoying a cup of Cadbury hot chocolate (best ever hot chocolate; I’ll be bringing some home and you’re welcome to come over and have some) and before that I had a cuppa (lipton yellow label, which we don’t have in the States, I’ll be bringing that back, as well – I first drank this in Kazakhstan and the first sip of it brings such happy memories to mind). I’m enjoying (but confused by) Midnight in Paris… Until the boys wake up, life is pretty good. And even then we can entertain them with their seasame street activity packs and feed them snack bags we were given for m

I would like to note we’ve only gotten the stink eye once on the plane. Shortly after we got on, Jack started coughing like a mad person and this little old lady kept glaring back at us with wide eyes and bent eyebrows and finally started wildly gesturing for him to cover his mouth; though by that stage Jack was forcing himself to cough so he could weedle some water out of us (we’d cut him off so he wouldn’t pee through his diaper as

he’d already done once on our trip). Simon, who was across the aisle from her,

over his mouth because he is just 2.75 after all and faking it to boot. Thankfully she ended up moving one row up (she’d taken the wrong seat) and we didn’t have to see her disapproving face any longer.

So far so good (now I shall go find something wooden to knock on).

Thank you for your prayers, I know I have them to thank for the upgrade and the current state of affairs…