Merry [post] Christmas everyone! Looks like I’ve got some catching up to do… we’ll start with the last month’s worth of Instagram photos with witty explanations (which is code for Michelle rambling – I took a Muscinex DM this morning and it might be going to my head). 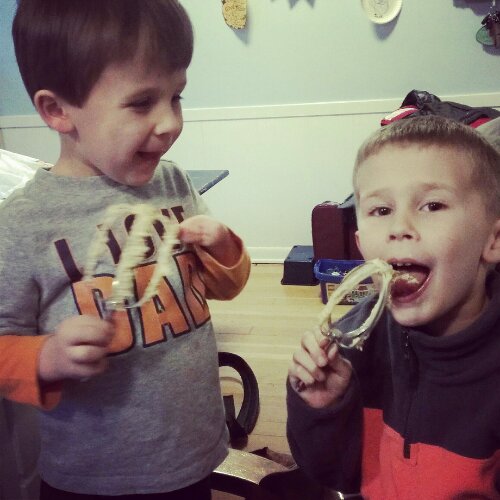 My boys love to help with baking, mostly because it means they get to lick the beaters when I’m done mixing. I’m okay with that since I have such happy memories of doing the same thing – though my mom mostly made oatmeal raisin cookies and that dough is not nearly as good as the stuff for triple chip blondies.

My boys are a little obsessed with “Gangnam Style” and in the photo above we were listening to it and they were running around dancing and cracking me up – especially Jack’s little strut move I sort of captured. 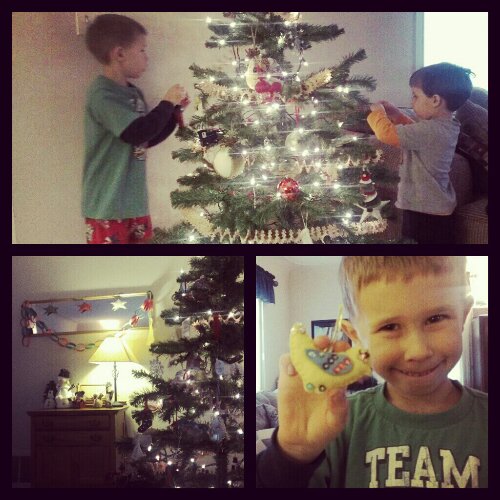 We decorated for Christmas – including our first family tree – the bejeweled bird Liam is holding is his favorite ornament. I’m hoping we can some day find an upgrade tree, one you can’t see through.

I just love his smile.

‘Tis the season for nonfat, no whip peppermint mochas.

Having long hair affords me the chance to play around with ideas I find on Pinterest… I am going to miss it when I cut it off for Locks of Love. 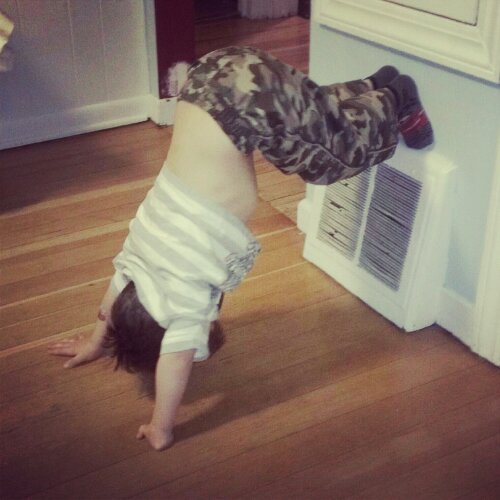 This kind never ceases to amaze me with the things he does.

All dolled up for my work Christmas dinner. 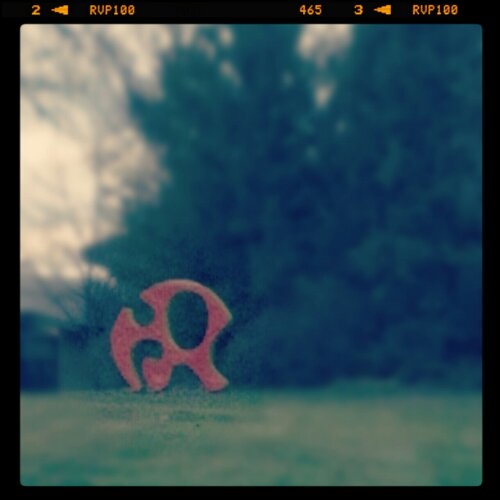 The “cheese” on Calvin’s campus (I believe the metal sculpture is supposed to be an abstract representation of Jonah and the whale, where you can be Jonah by sitting in the belly – sounds good to me).

This kid and his faces – he just has zero personality.

The Santa we visited at the mall was Awesome – he asked good leading questions and repeated what the boys told him so we could hear. We had to wait for a bit while they loaded paper in the printer and he chatted with Liam while Jack looked at him in awe and rubbed his hand along the fur at the edge of his coat. Unfortunately the fur was a little too inappropriately placed so when Jack hit it, it startled Santa a bit as I’m quite certain it was a little too close to a place Santa would not like to be hit. My child molested Santa – not many people can say that. 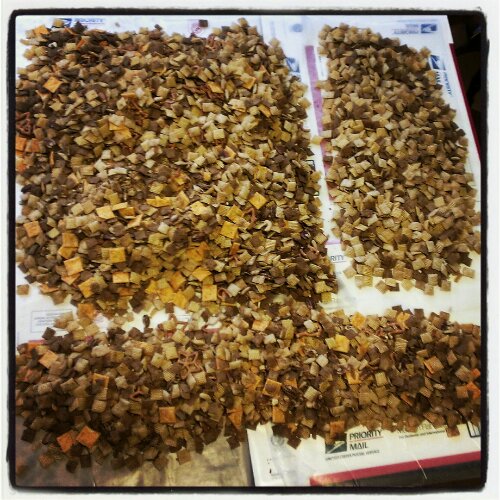 I made Chex mix… just a bit. The stuff in the upper right corner is special just for Simon – just the three Chex cereals and none of the other stuff (like pretzels, cheese-its and nuts). Good thing I love my husband enough to make him special Chex mix. 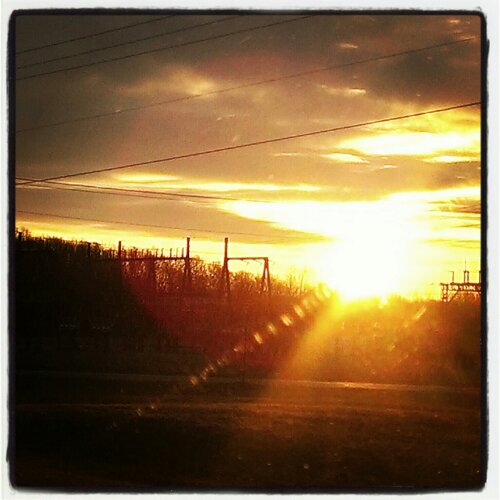 Sunrise over the power substation. 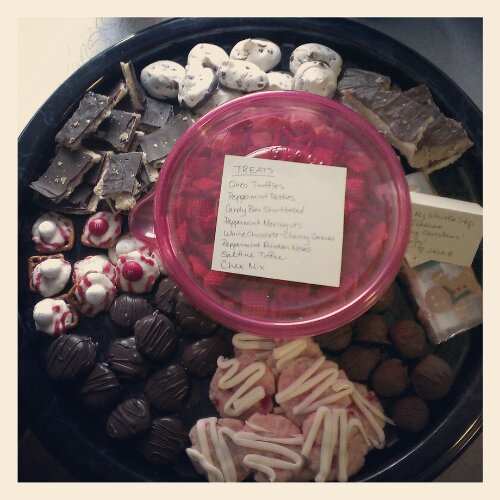 Making treats is my love language… this tray got delivered to Jack’s teachers at daycare.

Chocolate chip scones for my MOPS table… Jack loved these until they were baked and then I had to make him choke a bite down (while dry heaving) in order to earn a piece of Halloween candy. Seriously.

About twice a year I get crafty. Inspired by Leah, I made two trees out of the felt I had purchased to make a King Pig costume (over a year ago when I made the boys’ Angry Birds costumes). I need to make two more, in darker green and red to balance out the bright green of this one.

Continuing our annual tradition, we decorated Christmas cookies with friends. I did not share these with anyone else as Jack would alternate sprinkle application with licking the sprinkles off of his hand. 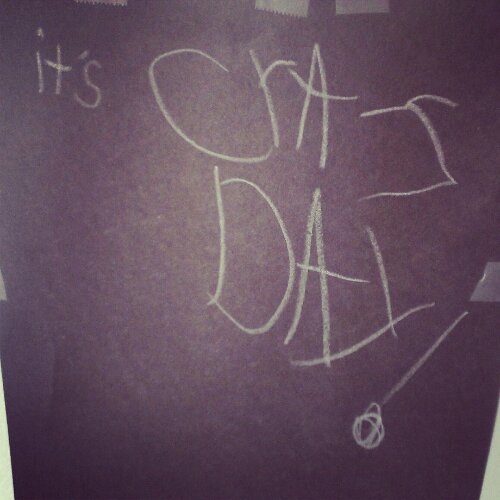 My kids declared the Saturday before we left for my parents’ house as “Cra-z Day!” They did their best to live up to the billing; hopefully now that Christmas is over, they can go back to being calm and docile. Ha. 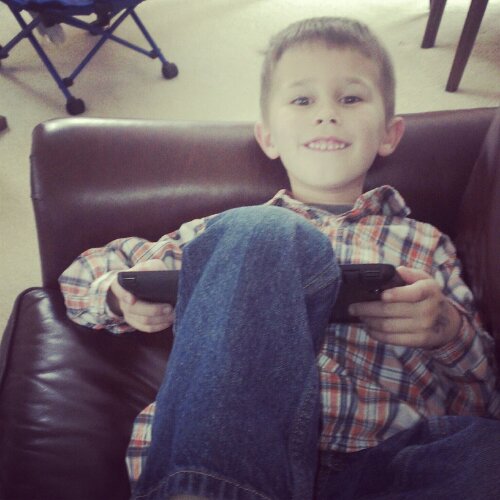 Someone is growing up – I see a future teenager in this picture. Hold me.

Christmas Eve selfie with my big kid! Sadly the bags under my eyes only disappear when I’m frowning (how this is fair, I don’t know). 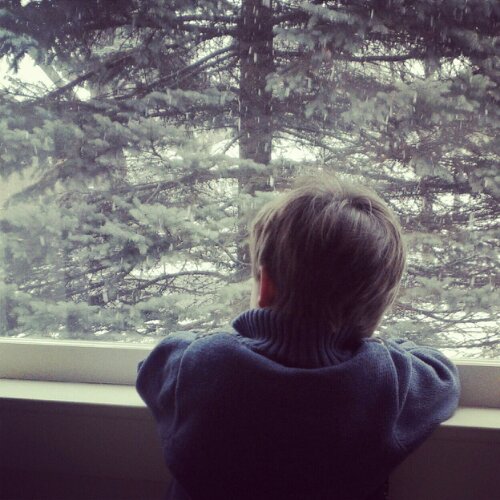 It finally snowed on Christmas Eve… Jack was a bit mesmerized. 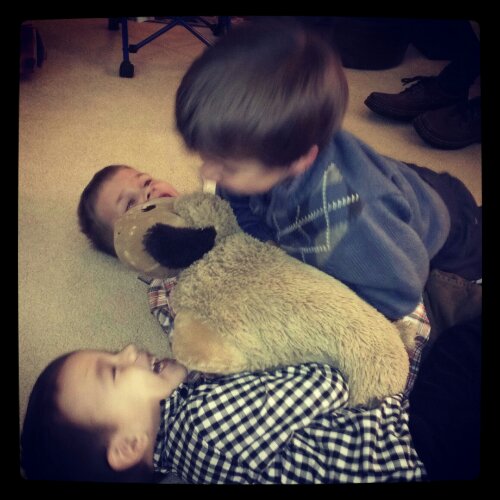 My boys initiated their cousin, Max, into the world of wrestling and jam piles – much fun was had. It, of course, ended in tears.

A rare photo of me with one of my brothers… the eldest of our triple M clan (Mike, Marty and Michelle – weren’t my parents cute?).

Getting my baby fix with [great] nephew Ethan (who my mom semi-hilariously kept calling “Keegan” because my friend Kara [who has the same last name as my niece] has a son named Keegan; Ethan has a new nickname). Doesn’t he look like his planning a world domination? 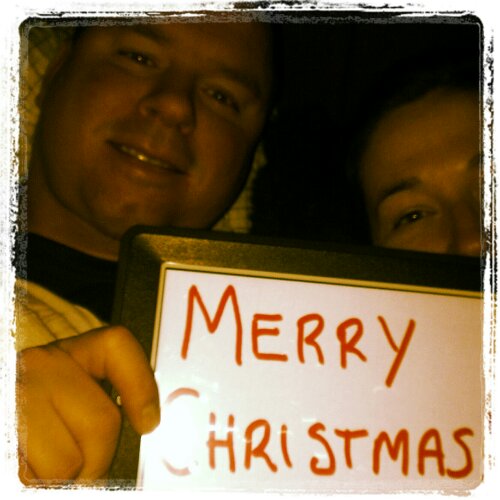 Simon and I are continuing our tradition of wishing the world Merry Christmas at the end of Christmas Eve.

Once again looking years beyond his age, Liam spent Christmas morning reading every name aloud from his 200-page Star Wars Lego Character Encyclopedia. He dubbed this his favorite gift, until he thought more and then decided it was his new Star Wars Wii game, and then his DreamLite, or maybe the trampoline or sock monkey Santa brought. Jack just loves it all, though I believe his favorite is his “Minja” Turtle from Grandpa and Grandma.

Aforementioned sock monkey. Thank you, Amazon, for the quick delivery after Liam asked for this from Santa. Well, this and a real dog that would sleep on his bed… Amazon doesn’t deliver live pets, so sock monkey it was.

This is what happens when the adults play cards and turn on the TV to distract the children.

No matter how much he spins, Jack never seems to get dizzy.