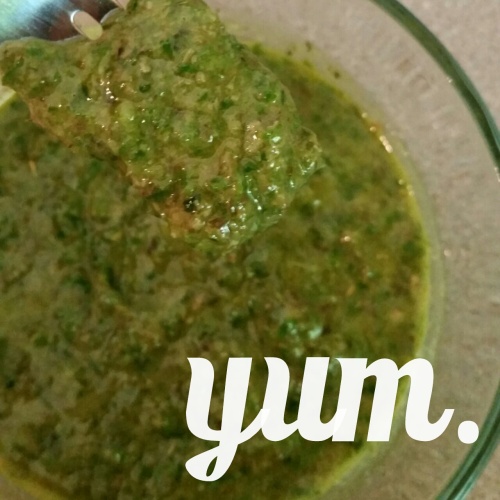 A brief intermission to share with you my new favorite dressing/vegetable topping…
I recently made this delicious Summer Squash Gratin with Salsa Verde from Smitten Kitchen. I adapted the sauce/dressing because a) I HATE parsley with a passion and b) have tons of basil out on my deck. I made some other tweaks and very much enjoyed the leftovers on salads for the next couple weeks. Here’s my version in case you would like to make your own. I’ve been having it on fresh tomatoes and fresh mozzarella or grilled veggies. Enjoy!

Put all ingredients except olive oil in food processor (or blender). With machine running, drizzle in olive oil until you get the consistency you desire. Store at room temperature in airtight container for up to two weeks. Alternatively, you can make larger batches and pour in large freezer bag and lay flat in freezer until frozen. Break off and thaw portion you would like to use as desired.

Nutella Mocha No-Bake Cookies
In double boiler, melt: 1/2 c. butter1 3/4 c. sugar1/2 c. milk2 tbsp cocoa powder2 tbsp instant coffee granules (I used 5 packets of Starbucks VIA instant coffee)
Remove from heat and stir in 1/2 cup of Nutella until melted. Stir in 3-4 cups of quick oats (original recipe called for 3 cups, I used 4 because mine seemed too runny and I also used Old-Fashioned Oats, use your judgement). Scoop onto wax paper and cool in fridge.

Like every other person in the world, we’ve been busy. That’s what happens at the end of the school year, when you work full time and also are packing up your house to move the first week in July. Throw in a round of IBS flare up and/or the stomach flu, camping one weekend and a family reunion and even the most prepared person might not find time to blog. But my fans are clamoring (read: my dad) for an update.

Here’s a recap of what I’ve been up to since last we met:

Bad photos of food – stuff we ate in Texas

I commented to a couple people that it was sad how forward I was looking to our trip for the food we would be having. Don’t get me wrong, I would go to someplace were very boring food just so I could see my family, but the fact that they live someplace with my favorite foods, well, that’s a double bonus. Add to that, the fact that I had been doing the blogging weight loss competition since the beginning of the year, let’s just say it was time for some yummy food and vacation is not a time for dieting (though we did a very good job exercising the first week – the second week, not so very much – bygones). So bring it on – we were going to enjoy ourselves.

Keep in mind, food blogger I am not and most of the time were so happy to be eating it would be mid-meal before I thought to take a picture so many of these things you will just have to imagine and trust that they were indeed delicious. (I apologize in advance to Heidi for this show of gluttony in one of her most favorite places in the world – I love you, friend, but it must be done).

Our first night in Corpus called for a visit to Silverados, hands down my very favorite BBQ place EVER (of course, I haven’t been to very many, but this place is so good, we went twice in the five days we were there). I had brisket, chopped BBQ and smoked sausage with mashed potatoes and corn fritters. Just thinking about it makes my mouth water. Liam ate a quarter-pound of smoked turkey and put away two cornbread muffins. Jack ate Lays potato chips and apple sauce.

Our second trip to Silverados I had chopped BBQ and pork ribs and thought I would be virtuous and get a side salad with my mashed potatoes (only because corn fritters weren’t in the menu that night). Wouldn’t you know the only thing I didn’t eat was my salad. Sorry salad.

Not pictured from Corpus:

Then we were off to Houston to stay with my brother and his family the rest of the trip, stopping at the famous Buc-ees on our way for snacks and Buc-ee Nuggets.

Dinner that night was a shrimp boil – and I peeled and de-legged all my own shrimp all by myself (I can’t think about it too much, but I can do it). The boys, of course, had chicken nuggets.

I’m realizing that the bulk of what we ate in Houston was not captured on film, but it is worth mentioning two places that we went on Saturday night with Marty and Lynn: Leon’s Lounge and Onion Creek. If ever you are in Houston, check them out.

Leon’s Lounge is “Houston’s Oldest Bar” and has every ounce of character you’d imagine that comes with. Plus they make killer cocktails. I enjoyed the fanciest Bloody Mary I’ve ever had, garnished with (among other things) a slice of sausage and a pickled okra, and a Whiskey Smash (Maker’s Mark, mint and a splash of lemon).

Onion Creek is a place we went last time we were in Houston and I could go there weekly – it’s got a huge outdoor seating area, sandwiches, burgers and pizza – lowkey but still feels hip and happening (which is ideal when the youngest in our group was nearing 35).

We also had breakfast that morning at the place Simon dreams about – Taqueria Arandas – for breakfast tacos with chorizo. The only downside to that breakfast is that you are full ALL day, which is a problem when you want to eat more yummy food at some point, which is why we didn’t eat dinner until nearly 9 that night.

When my parents came into town, we happily ditched our kids with them for the day and headed down to Galveston for the day. I did a quick online search and found a Houston Chronicle article listing the 10 best restaurants in Galveston and picked the one that didn’t serve seafood, BBQ or Mexican: Mosquito Cafe. Best decision of the day. These photos do not even do the food 5% justice, but they are all I have, aside from a picture of an empty plate where our devoured Lemon Dream Cake had been sitting.

Since we were going big or going home, we decided to stop at Pappasito’s on our way home – Simon’s first time there. Let’s just say we ended up taking more food home than we were able to eat – though we gave it a valiant effort. Below is the worst picture ever of our queso, but lo was it good. And they set it on fire tableside so it was also fancy. 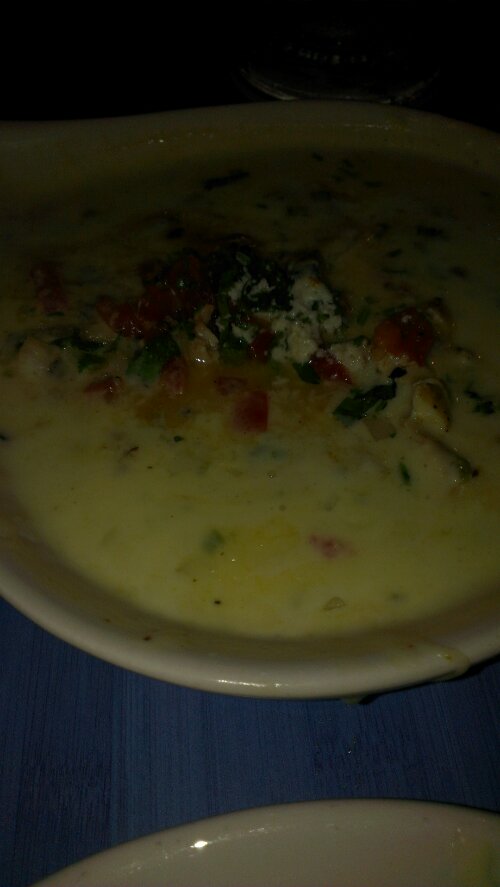 And we can thank my brother and SIL for introducing us to Pimm’s Cups. Look what I was able to find in Michigan, imported all the way from the U.K. so we can make our own cocktails! [Honorable mention: Saint Arnold’s Santo beer]

So that was how we ate our way through Texas, along with some stops at Chick Fil A and Sonic. Liam and Jack were happy as long as they had burgers (Liam), chicken nuggets (Jack) or fries (both). Next time we will work on broadening their horizons.

Posted in Food, Life in general

Shout out to my favorite spam comment of the week on this recipe post for Thai Curried Lentil Vegetable Stew: “There is noticeably a bundle to understand about this. I assume you created certain nice points in functions also.” (submitted by: michaelkorsbagdiscount.com – totally really site, I’m sure – P.S., not really, do not visit it). Yes, I am quite certain I made some nice points and that there is a bundle to understand about that RECIPE.

Perhaps this new recipe can entice 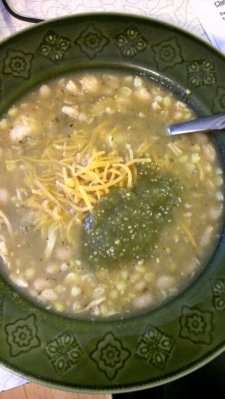 another great spam comment. Here’s hoping. Because then I will have funnies to share with you guys and that makes my day happier. I am an easy person to please.

Disclaimer: I have another favorite creamy chicken chili recipe from my friend, Keri, but it’s not nearly as guiltfree though it is equally as delicious, so delicious I once made the recipe for her when she was coming over for dinner.

I made this new recipe for myself last week for lunches and again for small group last night – both times delicious and oh-so-easy (unless you are my husband who does not like beans, in which case, you are out of luck – well, to the extent that you don’t get to eat this chili but your loving wife will also make you creamy potato soup [from a mix]).

Throw all ingredients in large pot on stove and bring to boil and simmer 20 minutes (or put in slow cooker on high for 3 hours). You can cook it longer, it will just get thicker as it cooks but it won’t hurt it, plus your house will smell divine. Serve with sour cream, shredded cheddar cheese, salsa verde and/or sliced avocado.

To go with the chili, I made these Brazilian Cheese Rolls – so yummy and gluten free if you are looking for recipes along those lines.

On a food-related note, for President’s Day, Liam had homework that had him write down what question he would ask the president if he could. His question: What is your favorite food? His imagined answer: vanilla ice cream. So there you go.

Posted in Food, Life in general