Jack, our two-year-old, is a bit of a pill. He’s the kid who gets into everything and is undeterred by traditional parenting techniques of saying “no” and redirection.* He will continue to come back to something he’s not supposed to until he has conquered the obstacle. This was a bit of a problem when it came to our kitchen chairs. We have wood floors and need to protect them from the scraping back and forth of chair legs so we added felt protectors to the bottoms of all the chair legs. This also makes it very easy for chairs to be moved across the floor, especially for a certain child of mine. Jack quickly learned to move the chairs and climb up on them to gain access to things out of his reach – whether that was on the table or the kitchen counter (knives, glass, electronics – oh my!). Enter the bungee cord – or, two bungee cords. 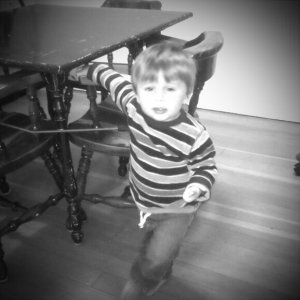 We have a small, square table with one chair on each side and by strategically hooking one end of a bungee cord on a chair and lacing it through the rungs on another and then attaching the other end to the chair opposite the first one we can secure the chairs to the table. Once you repeat this on the other side, all chairs are secured to the table. (In the photo above, you can see the bungee cord hooked to the chairs just below Jack’s armpit.)

These bungee cords also make it easy to stick Jack at the table and not worry about him tipping a chair over when he stands up in it – which he does all the time because, a) he has his daddy’s short legs and, b) he’s a pill. We removed the bungee cords when we had people over for Jack’s birthday (because we wanted to look a little classier and of course allow for adults to sit at the table) and wouldn’t you know he tipped the chair over within minutes of finishing his birthday cake.

We’ve also employed a bungee cord in blocking off the steps of Liam’s bunk bed. We got this bunk bed thinking how much easier it would be for a child to climb up to the top bunk using stairs rather than a ladder. Guess what? It’s much easier for a child to climb up to the top bunk, including a child who doesn’t have enough sense to not fall off the top bunk (Jack, I’m looking at you). So we needed to block off the stairs but the stairway opening was too narrow for normal baby gates. Enter: another bungee cord (plus a baby gate). The picture below is exactly like Liam’s bed if it had matching linens and wasn’t covered with a million stuffed “friends.” Ours has the added feature of a baby gate bungee-corded over the bottom of the stairs. So far this as successfully thwarted Jack but it’s only a matter of time before he figures out how to climb over it using the  base of bottom bunk as a step like his big brother does.

In other child-proofing adventures, we have one of those six-section baby fences that can be made into a large hexagonal enclosure or stretched out to block off a section of a room. For Liam, we used this to block off our television and related electronics as well as our fireplace with great success; I don’t think it ever occurred to him to try and go behind it around the open ends. As you can see below, it occurred to Jack and he did it on many occasions until we decided to sacrifice the protection of the fireplace for the safety of just the electronics. Now we have a large rectangle enclosing just the entertainment stand.

Above: baby gate fail; below: baby gate win,
though now we have to watch out for toy tubs being used to gain access to things
(he once stacked them 3-high to try and scale the gate blocking off the kitchen)

*Further proof that traditional methods do not keep our kid down, witness his utter disregard for the fridge lock:

This post is linked up to Works for Me Wednesday at We Are That Family.