I have jewelry I wear pretty much everyday, without fail, and I love it. Most of it came from my husband (awww), he has good taste, or at least good sense in following hints.

I’ll share them in the order I got them. The ring below is my oldest piece, I got it before I was married and is not from the hubs. I found it at the Easttown Street Fair and the scrolling reminded me of the letter “S.” My maiden name starts with S so I thought it was a fitting ring for me to have, knowing that someday I wouldn’t have that last name and I wanted something to always have with me as a reminder to honor where I came from. 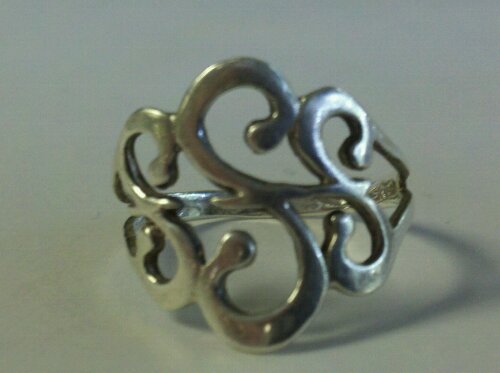 My engagement ring and wedding band. The engagement ring was all my husband’s doing, he picked it out without any input from me – in fact, I thought we weren’t getting engaged until after I met his family in Australia but he proposed two months before our trip. Sneaky, sneaky. The wedding band was a joint collaboration, but it was one we both loved. The hubs got a stainless steel ring with no bling (so it could withstand the roughness he put it through at work but would be cutable in case his hand ever got stuck in something, unlike titanium) but as a consolation, he also got an XBox – that’s the traditional bride-to-groom gift, right? 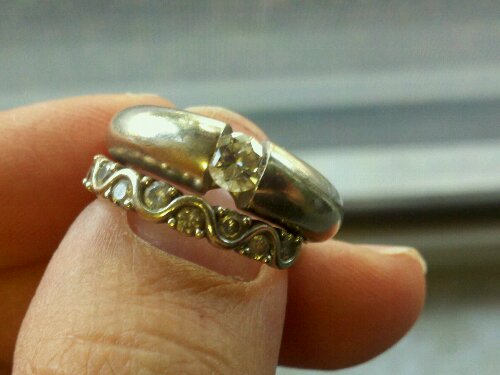 The watch below was a gift from my husband shortly after we got married, on the back it has the words “To My Wif” because after we got married we kept saying, it just doesn’t seem real so he called me “wif” and I called him “hubsand.” But when he went to get the engraving done, they verified multiple times that he actually wanted it mis-spelled.

The bracelet is actually the newest addition, it’s a Lucky Fin bracelet from the Lucky Fin Project. The mission of the Lucky Fin Project is to educate, celebrate, support and unite with regard to limb differences. Our youngest, Jack, was born without a fully developed left hand, called symbrachydactyly. Like Nemo and his small lucky fin, Jack doesn’t let anything keep him back and shows us every day that he certainly doesn’t need his missing four fingers. It’s important to education our children so they learn that things that are different aren’t wrong or bad, they are just different and how God made us. Some people have red hair, short legs, need a wheelchair or glasses; everyone has something that makes them different. My bracelet is a reminder of this, plus the money goes to support the mission of the Lucky Fin Project (they also have bumper stickers).

My necklace is perhaps my favorite piece of jewelry. Oh how I love Lisa Leonard and her designs. I strongly hinted to Simon that I wanted the tag necklace with the boys’ names on it (read: I put everything in a shopping basket on her website and emailed it to Simon, but he bought it). But for our five-year anniversary, I was surprised with the ring engraved with our names on one side and our wedding date on the other. I love, love, love it.

This post is linked up with Jill at Diaper Diaries.

This entry was posted in Life in general, who is ememby. Bookmark the permalink.

8 responses to “Things I Love Thursday: My “Everyday” Jewelry”